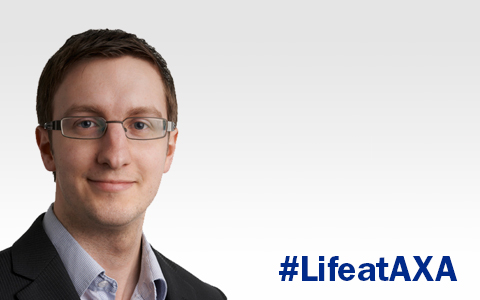 Actuaries manage risk, helping companies avoid undesirable situations and plan for the future. But what do they actually do all day? We caught up with Stephen Shepherd, a Commercial Pricing Analyst from the Dynamic Underwriting and Pricing Team, to find out.

On Thursday 22 October, Stephen took over our Twitter account to show us his #LifeatAXA as an Actuary.

In early to an empty office - chance to do a bit of studying before work! Stephen's #LifeatAXA pic.twitter.com/vttu1TrE6B

AXA has a great study scheme that has supported me through my actuarial exams, both financially and with time off work to study. Most of the team are studying alongside doing a full-time job so time management is key. That being said, there is a great focus in AXA on work-life balance and we have flexible working hours, but it never hurts to catch a few early mornings for studying to get ahead of the game!

The Dynamic Underwriting and Pricing Team has a great wealth of knowledge that covers Pricing, Reserving and Capital Modelling, so are often involved in projects with other teams. We are also encouraged to do rotations and secondments in other teams to strengthen that knowledge. The weekly meeting is a great place to catch up and hear about all the projects people are working on.

We’re developing machine learning capabilities in R/Python software which will help us identify the shortfalls in our current models. This is an exciting new opportunity for our team and something I look forward to being a part of.

Someone’s back from holiday and brought in the obligatory office cakes. Stephen's #LifeatAXA pic.twitter.com/vKafNvYVDE

While he enjoyed a cake we asked Stephen, “If you had a super power for the day what would it be and why?”

I have always been fascinated by time, the potential power to manipulate it and its interaction with space. So if I had a super power for a day it would be the ability to stop and rewind/fast forward time. I probably watched too much of Bernard's Watch as a child.

As an Actuary I’m involved in the building and maintaining of the pricing models AXA uses, working with an underwriter to set the premiums for our commercial products, such as Landlord Insurance. I’m currently using past insurance claims information to create a guide for adjusting next year’s rate changes – we’re constantly looking to price risks more efficiently than our competitors.

A Rubik's cube is never far away from an Actuary when SAS code is running, @Rubiks_official. Stephen's #LifeatAXA pic.twitter.com/SdVldekkmS

A lot of our work is based in SAS analytics software so you really need a keen interest or willingness to learn programming if you want to be an Actuary. When there’s a lot of data to get through, the code can take a while to run – we’re all keen problem solvers and we don’t like to be idle when waiting so there are a few Rubik’s cubes floating around the office to keep our minds active!