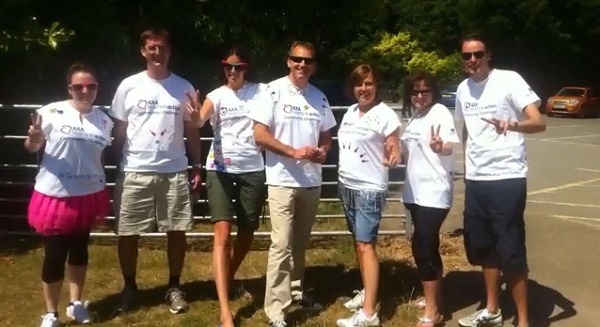 Team spirit was extremely high last summer as over 50 people walked in the blistering heat to raise funds for St Michael’s Hospice. Temperatures surpassed 30°c as the teams donned their walking boots and took part in either a 7 or 10 mile route around Basingstoke. Several pimped up their charity t-shirts for the occasion and a few even went that step further with fancy dress. Prizes were handed out at the end for the best dressed.

Over £2,000 has been raised for St Michael’s Hospice with the time taken to complete the walk being added towards our volunteering target. Below are some comments from those who took part:

“It was a really well organised event in the name of a truly worthwhile cause. I thought it would be an easy afternoon out the office, but 31 degree heat, sunburn and a few blisters later I think I earned a cold pint back at the rugby club! Here’s to team spirit and St. Michael's Hospice.” Phil James-Bailey

“The walk was tough overall due to the heat and lack of shade and wind on Friday (so by no means an easy 10m). However, this did add to the challenge! There was a great turn out of people and a good mix of teams in fancy dress which added fun and team spirit to the event.  Penny Abbott did a great job setting out a lovely scenic route which made a nice change from previous years as it was a lot more rural and meant discovering new areas around Basingstoke. The highlight was making it to the finish and enjoying a very tasty BBQ, overall a really worthwhile and fun event!”  Katie-Jane Neave

“There was a real togetherness about the group of people that took on the walk last Friday, with people merrily chatting away prior to the walk, probably unaware of how much energy they were about to expend in the arid climate which had been enveloping Basingstoke for what must be a record number of weeks. People were dressed to kill, with enough glitter about the place to concern Lady Gaga! Everyone nursed their blisters over a delightful beer and barbecue afterwards, whether they’d suffered for seven or toiled for ten.” Tom Kelly